How do we get a conceptual grip on “the environment” and what is happening to it? If we imagine its future is going to be different from its present (or past), how do we present the nature of that difference? Is the aspect we are interested in going to be more, or less (frequent, intense, reliable, and so on)? Does this make it better, or worse? To begin to answer these questions, we need to have some kind of measure, breaking down a continuous world into discrete elements. At the same time—ironically—to understand a phenomenon like global change.

Although the currents of the ocean form a most important part of hydrography, yet it is only since the introduction of chronometers, and of celestial observations for the longitude at sea, (that is, not much more than forty years ago), that a competent idea of their direction and force, in any kind of detail, could be obtained. For although the differences in northing and southing, between the dead-reckonings and observations, might be pointed out by the observations of latitude, yet the error of longitude, or of easting and westing, would, of course, escape detection altogether: and it happens that, in the Atlantic Ocean, which forms the scope of the present inquiry, the streams o current, which most materially affect naviation, both in respect of extent and velocity, run more easterly and westerly than otherwise. ... The formation of a great number of facts into a system, may, it is presumed, prove of use in impressing those fact on the mind more strongly than if they were left to operate independently of each other. For often times a fact makes less impression, when standing naked and alone, than when it makes part of a system, which operates like a band to keep the parts together in their proper places, when they may happens to explain and illustrate each other...  (källa, källa2) 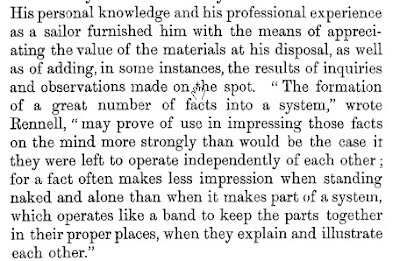 During the decades which have passed since meteorology first took shape shortly after the beginning of this century, the network of meteorological stations which is at our disposal for the study of the daily changes in state and movements of the atmosphere, has been extended in an impressive way. It is now possible to give a rather satisfying picture of the air movements of the troposphere and the lower stratosphere twice a day over the major part of the northern hemisphere. At the same time our knowledge of the dynamics and physics of the atmosphere has to some degree become more profound. ... "It has been pointed out frequently that mankind now is performing a unique experiment of impressive planetary dimensions by now consuming during a few hundred years all the fossil fuel deposited during millions of years".

In the space of a single human lifetime, society finds itself suddenly confronted with a daunting complex of tradeoffs between some of its most important activities and ideals. Recent trends raise disturbing questions about the extent to which today’s people may be living at the expense of their descendants, casting doubt upon the cherished goal that each successive generation will have greater prosperity. Technological innovation may temporarily mask a reduction in Earth’s potential to sustain human activities; in the long run, however, it is unlikely to compensate for the depletion of fundamental resources, such as productive land, fisheries, old-growth forests, and biodiversity.

This independent Review was commissioned by the Chancellor of the Exchequer, reporting to both the Chancellor and to the Prime Minister, as a contribution to assessing the evidence and building understanding of the economics of climate change.

The Review first examines the evidence on the economic impacts of climate change itself, and explores the economics of stabilising greenhouse gases in the atmosphere. The second half of the Review considers the complex policy challenges involved in managing the transition to a...

Introduction Part 10: The Anthropocene: How Can We Live in a World Where There Is No Nature Without People? Introduction (pp. 479-482)

As the world reached the end of the twentieth century, the environmental news was not good. Climate scientists were close to a consensus that human-forced climate change was happening. Conservation activists and biodiversity experts were talking of a sixth mass extinction. And the world’s population was rapidly approaching the 7.8 billion absolute limit put forward by George Knibbs in 1926 (see Part 1). The global view was disturbing, but the world was also becoming hardened to environmental bad news. The increasingly popular slogan of “think global, act local” often just seemed to highlight the gap between aspirations and achievement.

The name Holocene (“Recent Whole”) for the post-glacial geological epoch of the past ten to twelve thousand years seems to have been proposed for the first time by Sir Charles Lyell in 1833, and adopted by the International Geological Congress in Bologna in 1885 (1). During the Holocene mankind’s activities gradually grew into a significant geological, morphological force, as recognised early on by a number of scientists. Thus, G. P. Marsh already in 1864 published a book with the title “Man and Nature,” more recently reprinted as “The Earth as Modified by Human Action” (2). Stoppani in 1873 rated mankind’s...


Johan Rockström - "Planetary Boundaries"
“A Safe Operating Space for Humanity” (2009) (pp. 491-505) in Nature (on Researchgate), och med fler författare med titeln "Planetary Boundaries - Exploring the safe opertion space for humanity” i Ecology and Society (Resarchgate)
JOHAN ROCKSTRÖM, WILL STEFFEN, KEVIN NOONE et al (video 18 min, video 9 min).
Although Earth has undergone many periods of significant environmental change, the planet’s environment has been unusually stable for the past 10,000 years. This period of stability—known to geologists as the Holocene—has seen human civilizations arise, develop and thrive. Such stability may now be under threat. Since the Industrial Revolution, a new era has arisen, the Anthropocene, in which human actions have become the main driver of global environmental change.

Human beings are always trying to come to terms with the climates they live with. This is as true for the ways the relationship between society and climate is theorized as it is for the practical challenges of living fruitfully and safely with climatic resources and hazards. The story of how the idea of climate has traveled through the human imagination is well told in Lucian Boia’s The Weather in the Imagination, and an exemplary account of how a society seeks practically to live with its climate is William B. Meyer’sAmericans and Their Weather.